Both the Malta and Hong Kong Maritime Registries have confirmed that they recognise and acknowledge the merits of electronic record keeping in enhancing credibility, transparency and accountability

Prevention at Sea (PaSea) is pleased to announce that two more maritime registries, Malta and Hong Kong, have recognised the merits of its oil record book software and approved its use throughout their fleets to help with the manual recording of Oil Record Book (ORB) entries.

Called the ε-ORB, this software has been designed to aid the preparation and printing of the traditional ORB and complies with the IMO guidelines published in the last PPR5 for electronic record books (February 2018).

It is anticipated that electronic oil record book entries will replace the traditional paper ORB versions whenever MARPOL is amended, due to the more efficient process and reduced risk of errors occurring.

END_OF_DOCUMENT_TOKEN_TO_BE_REPLACED

In the past 18 months, Britannia’s Members have benefitted from USD61m (or 32.8% ETC) of deferred call waivers and capital distributions, as well as nil General Increases for both P&I and FD&D calls for 2017/18 and 2018/19.   Even allowing for these distributions, S&P has confirmed Britannia’s rating of A (stable), AAA capital and exceptional liquidity (up from strong).

The Association’s ability to continue to assist Members is a consequence of repeated strong underwriting results; with 2017/18 seeing a USD64.6m underwriting surplus and a USD48.6m gain on its investment portfolio. Overall, the Association’s balance sheet reserves rose by USD50.6m. This is after taking into account the USD30m capital distribution made to Members during 2017. [The surplus assets in Boudicca (which are available to meet future claims) stood at USD211.6m.]

Given this further strengthening of the Association’s capital position, the Board decided to declare another USD20m capital distribution, payable to mutual Members with ships on risk as at midnight GMT 15 May 2018 (pro rata based on premium). This immediate benefit to Members re-affirms the Association’s commitment to mutuality, while reflecting its continuing financial strength which provides a high degree of security to its Members. The Board will review the Association’s financial position further at its October meeting.

While higher than in the 2016/17 policy year (a remarkably light one for claims), claims during the 2017/18 policy year were well within projection.   Large claims (those expected to cost the Association USD1m or more) have remained consistent in number but returned to the higher average seen in earlier years. IG Pool claims (Britannia has no Pool claims in 2017/18) have also seen an increase, with a number of high profile casualties. Nevertheless, they remain within projection.

END_OF_DOCUMENT_TOKEN_TO_BE_REPLACED 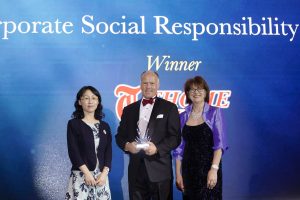 The Thome Group has won the Corporate Social Responsibility award at the 2018 Seatrade Maritime Awards Asia.

The judging panel were impressed with the variety of different ways in which the company encouraged its employees to take part in activities designed to benefit the community.

Thome employees give up their free time to help those less fortunate than themselves and the community as a whole, in a wide variety of ways including:

END_OF_DOCUMENT_TOKEN_TO_BE_REPLACED

Prevention at Sea Ltd has recently been authorized by the Panama Maritime Authority as a recognized manufacturer and distributor of the Panamanian Oil Record Book in electronic format as well as the electronic version of other official Books in general.

The merchant marine circular MMC-193 has been re-issued by the Panama Maritime Authority with the aim to notify the Industry that the Oil Record Book software as well as other official log books produced by the company are now accepted on board Panamanian vessels.

Since 2014, Prevention at Sea has been very active in software development in the maritime sector by winning multiple awards for innovation, especially with its Lloyd’s Register approved ε-ORB software, designed to be used for the preparation and printing of the traditional Oil Record Book.

This piece of software is already in compliance with the IMO guidelines published in the last PPR5 for electronic record books (February 2018) and will replace the traditional paper Oil Record Book whenever MARPOL is amended to allow the use of paperless electronic record systems.