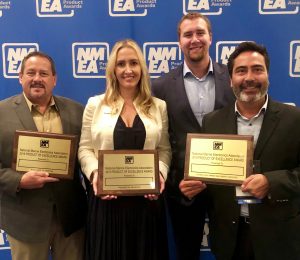 “Receiving three NMEA product awards this year is a thrill for KVH, and we are extremely honored,” says Jim George, KVH’s senior director of global leisure sales. “Knowing that NMEA’s marine electronics professionals continue to give our products their vote of confidence means the world to us.”

The TracPhone LTE-1 is a 34 cm (13 inch) marine-grade system utilizing LTE-Advanced (LTE-A) network technology to enable boaters to enjoy streaming video, web browsing, social media, and more, up to 20 miles offshore. The system includes a high-gain, dual LTE-A antenna array for a stronger signal with service up to twice as far offshore as a cellphone.

The TracVision TV3 is a 37 cm (14 inch) marine satellite TV system ideal for powerboats and sailboats that cruise as far as 100 nautical miles offshore. The TV3 makes it possible for boaters to enjoy their favorite high-definition television programming while on the water.

KVH is a mobile tech innovator that provides connectivity solutions for commercial maritime, leisure marine, and land mobile applications on vessels and vehicles, including the award-winning TracPhone and TracVision product lines, the global mini-VSAT Broadband network, and AgilePlans® Connectivity as a Service (CaaS). The company’s KVH Media Group provides news, sports, and entertainment content with such brands as NEWSlink™ and SPORTSlink™.