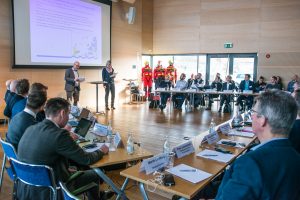 The Swedish Club and Stena Line have completed a major Emergency Response Training Exercise, designed test how Stena’s own comprehensive emergency procedures integrate with those of the authorities and support services in the event of a major incident.

The round table exercise took place last week at the Swedish Sea Rescue Society headquarters, with over sixty expert contributors taking part. The drill, jointly planned and conducted by the Club and the Swedish Joint Rescue Coordination Centre (JRCC), tested the levels of cooperation required between the resources and authorities that would be at the centre of a mass evacuation from a passenger ferry in the Gothenburg area.

Cooperation was the key word for the day, with a diverse cast of players also including DNV GL, Svitzer, the Swedish Flag State Authority, the police, Swedish Coastguard, Swedish Navy and Defence Force, the City of Gothenburg, Swedish Maritime Administration, the Port of Gothenburg, the local Fire Brigade, local medical services, the Swedish Sea Rescue Society, and a local commuting ferry operator Styrsöbolaget – all important players in a rescue operation of this size in this area.

In the scenario the Stena Danica, a 152m ferry carrying 230 vehicles and more than 850 passengers and 60 crew, collides with a container ship and the vessel is holed. Its stability is critical, and decisions must be made in the face of worsening weather conditions to work with the cast of third party support organisations to ensure the safety of the passengers and crew, and to protect the integrity of the vessel.

“To set up such a realistic scenario with so many participants was an immense job for The Swedish Club and we were delighted to take up the opportunity to test our emergency plans,” said Jörgen Lorén, Stena Line. “Stena has developed its own comprehensive procedures, and this exercise has been invaluable in reinforcing who is responsible for which action during an emergency, and ensuring that our emergency response plan is sufficiently robust should a real life crisis occur.”

Lars A. Malm, Director, Strategic Business Development and Client Relations said: “This round table, collaborative approach has been developed to test how operations are affected when dealing with an incident. The scenarios have been designed to show participants just how easily a situation can escalate; the various parties and processes involved in dealing with an emergency, and the complicated interplay between the various bodies involved in bringing an incident to a resolution.”

The Swedish Club has run more than 40 such scenarios since the Emergency Response Training Scheme was established in 2017. The Club’s loss prevention team is offering a series of alternative scenarios such as grounding and wreck removal, cargo damage, salvage and pollution, collision, tendering and repair, forum shopping and legal and medical scenarios. As part of the Club’s commitment to loss prevention, the training is offered to members of The Swedish Club free of charge and response to the initiative has been extremely positive.