The Thome Group is delighted to announce that it has won the Green4Sea Dry Bulk Operator Award, which was announced during a ceremony at the Yacht Club of Greece on 3rd March 2020.

The win recognised that the Thome Group was a “ship operator of bulk carriers that demonstrated environmental excellence and performance.”

The Thome Group was up against a shortlist of four other prestigious companies operating in this sector and the final decision was based on an audience vote where the industry was invited to choose their preferred dry bulk operator who had demonstrated outstanding environmental consideration. 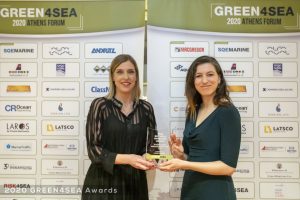 “I am delighted that the Thome Group has won this award as it highlights how much emphasis we have put on ensuring that we make as minimal an impact on the environment as possible. I would especially like to thank our Environmental Compliance Department in supporting our crews and office staff with training and information to help ensure we comply with all necessary environmental regulations. My thanks also go to everyone who voted for us, as having our commitment recognised by our industry peers is very humbling.”

END_OF_DOCUMENT_TOKEN_TO_BE_REPLACED 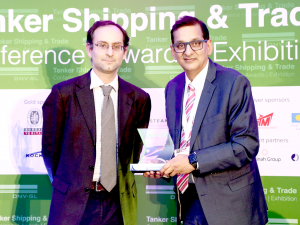 The Thome Group is delighted to announce that it has won Tanker Shipping & Trade’s 2019 Environmental Award which was presented to Capt. Atul Vatsa, Thome Group’s VP of Compliance & Marine Safety and Sean Hutchings, COO of the Group’s Bulker Division, during a gala dinner held in London on 26th November.

The award recognised “the company, individual or institution that had found a solution to an environmental challenge or problem within the tanker industry.”

The adjudicating panel of industry experts were impressed with Thome’s implementation of a mobile based application called NAU that was designed to monitor the performance of its entire managed fleet. The app includes an ‘Environment’ module that covers daily monitoring of the accumulation and disposal of machinery space bilges and sludge on board across all managed vessels and alerts the vessel managers when there is excessive build-up beyond set benchmarks.

“NAU compliments Thome’s zero tolerance policy to marine and environmental contamination and acts as the company’s automated whistle blower keeping the interests of the company, its ship owners and stake holders intact, acting as an early warning system to any potential risks which could lead to system failure, human errors, etc. I am so pleased that our environmental commitment has been recognised by the industry and would like to thank those people who voted for us.”