Norsafe has launched a brand new boat, the Marathon 900 RIB. Complementing an already wide range of boats for professional and military customers, the company’s first RIB was launched at High Speed Boat Operations (HSBO) in Gothenburg this month.

Not only the boat was new, but Norsafe’s Marathon 900 RIB was demonstrated with two newly developed Mercury outboard engines that can run on diesel fuel. Mercury OptiMax Diesel Outboard, which was developed for the US Armed Forces, is a 3.0 litre V6 engine that produces 175 propshaft horsepower. 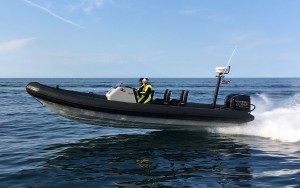 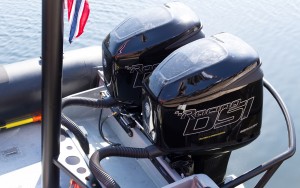 Bjarte Skaala, the designer of many of Norsafe’s boats, was present at the launch in Gothenburg and was very pleased with the 9 metre RIB’s functionality, seaworthiness as well as the positive response from the visitors at HSBO.

“The typical benefits of a RIB are a low centre of gravity, large carrying capacity in terms of weight and size, very good stability in the case of water filling the boat, and a “soft” inside which reduces the risk of damage to the crew“, said Bjarte Skaala.

“Norsafe’s Marathon 900 RIB concept is modular and flexible, and can be equipped with inboard diesel engines/water jet, stern drives and lifting points for installation in davits”, added Mr Skaala.

The outboard engine from Mercury, which runs on diesel fuel, is comprised of 95% of the components of a 225hp gasoline engine, and is a low-compression engine that utilises an advanced fuel injection concept.

To ensure the engine starts in cold environments and idles smoothly, the engine is equipped with both glow plugs and spark plugs. “This concept is especially important for the customers who do not have the opportunity to store gasoline on board a ship, such as naval vessels”, says Mr Skaala.

With the release of the Marathon 900 RIB, Norsafe has strengthened its position as a complete supplier of patrol boats and rescue boats for the military and professional markets.